Mr Bates was a 27 year old man working alongside his father on the family farm when he injured his foot following a fall.

He had fractured the metatarsal bone in his foot, an unusual fracture known in the medical profession as a ‘Jones fracture’. Fractures to this particular area of the foot are slow to heal with healing often delayed and in some cases the bone fails to unite.

You have given me the confidence to return to work and I feel so much better within myself.

Mr Bates was referred to an occupational therapist/case manager from Independence Works six months after his accident. At this stage he was motivated to return to work but was still experiencing prolonged pain and symptoms to his foot. Since exposure to cold and damp weather (an unavoidable part of farming) particularly aggravated his symptoms, this was identified as a key area to be addressed in order for him to return to work.

Returning to work on the farm

The occupational therapist completed a worksite site assessment to gain further understanding of the physical demands of Mr Bates’ work role and his work environment. They discussed the observed physical demands of his work role with his treating orthopaedic consultant and gained medical support for Mr Bates to return to work. The occupational therapist developed a graded return to work programme, which allowed Mr Bates to return to work part time, gradually increasing his hours and responsibilities over an agreed time frame.

Safety boots were part of Mr Bates’ work attire however the steel toecap boots he had previously worn proved painful and heavy for him following his injury. The occupational therapist sourced lightweight safety boots together with reusable heat packs for him to wear in the boots to keep his feet warm, funded by the insurance company involved. Both the boots and the heat packs helped reduce the effects of the cold and facilitated Mr Bates to return to full time hours.

Mr Bates successfully returned to his full pre-injury role as a farmer on the family farm. 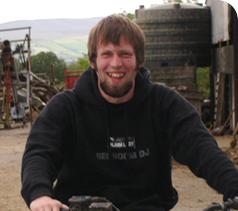