Mr Campbell was 26 years old when he sustained an injury to his left eye as a result of an accident whilst at work.

The injury had significantly affected the vision in Mr Campbell’s left eye. At the point of referral to an occupational therapist/case manager, Mr Campbell felt ready to return to work but did not wish to return to his pre-injury role as a turf harvester due to the outdoor nature of the job and its physical demands.

Getting Mr Campbell back to work

Mr Campbell was however keen to return to a different role with his existing employer if possible. The occupational therapist contacted Mr Campbell’s employer and arranged a meeting and worksite assessment. During this meeting she assessed the environment in relation to Mr Campbell’s pre-injury role and discussed potential alternative roles. Mr Campbell’s employer was brought up to date regarding his condition, function and fitness for work.

It was agreed that Mr Campbell would not return to his pre-injury role and his employer identified an alternative office based role, completing web design and maintenance, offering on the job training. The occupational therapist developed a graded return to work programme to account for any visual fatigue Mr Campbell might have experienced following a long period of absence and maintained frequent and close liaison with him and his employer, providing continued support and advice. Mr Campbell successfully returned to full-time work with his pre-injury employer, in a new role. He was able to manage the role effectively and reported that he felt he had found a new career for the future. 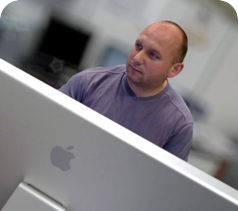