I would like to say Thank You for all the hard work.

Mr Edwards’ right tibia and fibula had been internally fixed with a metal rod and his left ankle fixed with four screws and a metal plate. When the occupational therapist/case manager visited him three months after the accident he was in chronic pain and unable to walk without the aid of elbow crutches. He had lost fitness and stamina, was unable to drive, and was understandably low in mood. He definitely did not want to return to work near forklift trucks in the future. Mr Edwards attended out-patient physiotherapy through the NHS – the case manager remained in contact with him throughout this period, encouraging him to set small goals relating to increasing his walking tolerance, returning to purposeful activity and maintaining a good sleep routine.

Getting Mr Edwards back to work

The occupational therapist/case manager arranged a meeting with Mr Edwards’ employer to discuss re-deploying him within the company, based on his transferable skills and qualifications. She encouraged Mr Edwards to write a formal CV, submit this to his employer and to follow this up. She wrote to Mr Edwards’ GP concerning regarding his fitness to return to work and his pain medication which was making him drowsy and interfering with his ability to drive safely. As a result the GP supplied him with alternative medication and signed Mr Edwards fit for light duties.

A year and six months after his accident Mr Edwards returned to work despite the fact that he continued to experience pain in his left leg. He was re-deployed into an office-based role four days a week with a view to increasing this to five days once he was able to manage these hours. He continues in this full-time employment two years on. 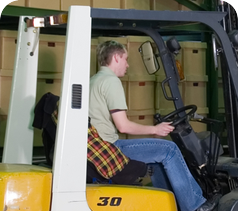